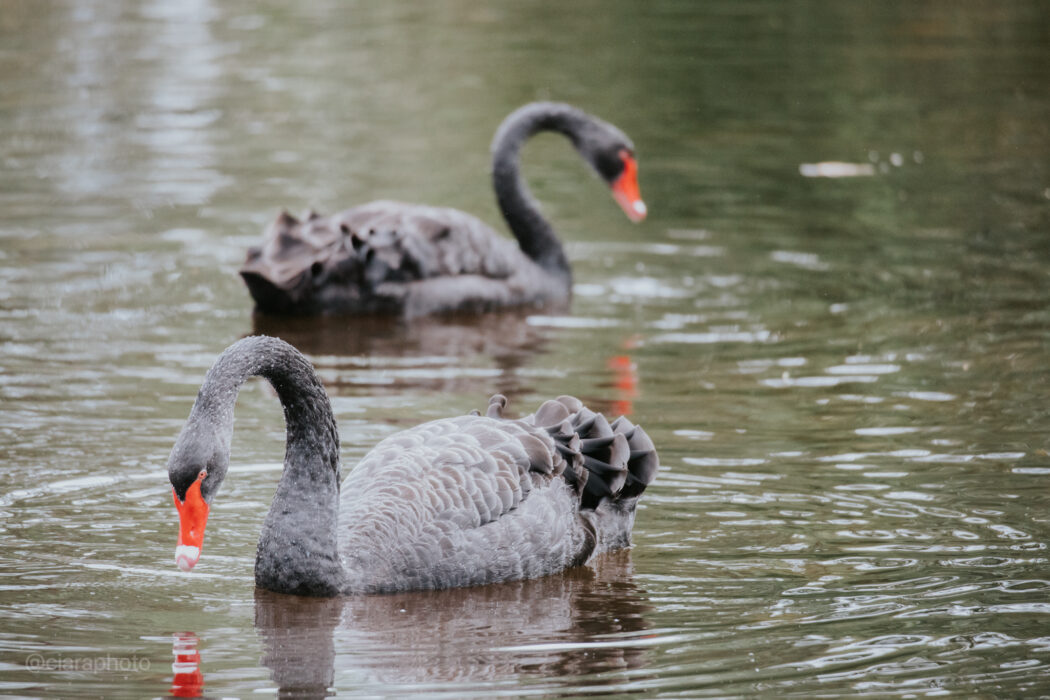 When you visit Saddles, you might be lucky enough to come across some of our animal and bird residents that choose to call the property home. Two of our most notable inhabitants and regularly photographed are Bruce and Betty, two black swans that roam freely and live on site. Native only to Australia, the black swan is a unique species with intriguing features and characteristics.

We recently sat down with Saddles’ resident bird handler and manager, Savannah Wheatley to learn more about the black swan and the life of Bruce and Betty.

Savannah, can you tell us a little bit about the black swan?

Native to the wetland areas of southwestern and eastern Australia, the black swan is a very distinctive waterbird – you’ll find that they mostly have black feathers and a bright red bill. A male black swan, called a cob, is generally bigger than a female black swan, called a pen. They can live up to 40 years. To give you an idea, Bruce and Betty are approximately four years old.

Generally, black swans are well natured, however, they can become territorial when breeding and looking after their young. Our swans are relatively placid due to the fact they’ve been around people and have had human contact since they were cygnets.

What’s a typical diet for a black swan?

Wild black swans are mostly herbivores and choose to eat aquatic and wetland plants and vegetation. Along with this, Bruce and Betty’s diets are also supplemented with a seed and grain mix.

When you’re at Saddles, you might see them both dip dive or drop their heads into the water. Swans have a unique way of feeding –when in shallow water, they have the capacity to dip the head and necks under, keeping their head flat along the bottom and keeping their bodies horizontal. When the water is deeper, they do that typical swan dip dive or tail up technique to be able to reach lower.

Is it true that black swans mate for life?

It certainly is in most cases – there’s probably about a six per cent divorce rate in swans, but generally, they are very loyal creatures and completely monogamous. When it comes to parenting, it’s a shared effort, with both parents taking turns to look after the eggs and young.

What happens when black swans decide to breed?

Typically a female black swan will lay 10 eggs and the incubation period lasts around a month or so, maybe a little longer. During this time, they can be more aggressive as they become very protective of their nests. When the cygnets hatch, both parents will stick around for nine months taking care of their brood together. Cygnets are particularly cute as they emerge from their eggs extremely fluffy with grey feathers and a black beak.

Fingers crossed that we’ll have some new additions to Saddles, as we’re hoping that Bruce and Betty will breed very soon.

Savannah Wheatley is Saddles’ resident bird manager and handler and is extremely passionate about all creatures great and small. She has over five years of experience in animal management and currently holds her Certificate III in captive animals from TAFE.